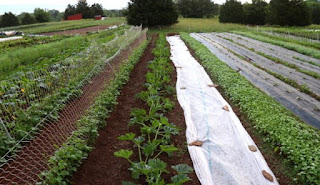 Earthworms or night crawlers are best used as fertilizers for vegetables, whether in small or large areas. Such organisms are best suited for a type of composting called vermicomposting. The composting type is a process wherein worms are fed to excrete a form of soil that is very rich in necessary and productive nutrients essential to growth of vegetable crops. This is clearly one technique to implement biodynamic farming. It is not surprising that these days, more and more farmers are treating earthworms as their real best friends.

In the past, or in some agricultural areas elsewhere in the globe today, some vegetable farmers regard earthworms as pests. That is why they keep on killing and removing worms they see around their crops. Little did such farmers know that earthworms are actually helpful. As such, the small organisms should be left alone and should be allowed to make burrows in the soil. Such small diggings have proven to be advantageous because they facilitate the flow and entry of air to the soil and down through the roots.

In the US, there are studies conducted by the Ohio State University showing how presence of earthworms in vegetable soil help the plants grow pest-free and ideally better. Vermicompost has been observed to free cabbage, pepper and tomato from savage and harmful pests like aphids, mealy bugs and caterpillars. Though the exact scientific reasons for the events are still yet to be determined, experts suggest that it is because vermicomposts are rich in highly essential nutrients that help vegetable cops become stress resistant and eventually unattractive to pests.

People should also be corrected and educated for their misconception that worms cause rotting of roots and of tubers. Experts and horticulturists emphasize that maggots and other pests usually cause such problems, not worms. In fact, earthworms are known to feed on decaying matters, decomposing leaves and barks and animal manure. The organisms have never been known to feed on vegetable roots, tubers and crops. This is surely one biodynamic farming technique that needs trying out.

If you plan to plant and raise vegetables on the big scale, it would be better if you would consider putting earthworms as fertilizers. Doing so would surely result to better and healthier growth of the vegetable crops and eventually to higher yields and harvests. Biodynamic farming is advantageous in such a way that there is no need to spend too much on chemicals just to make plants healthy. By keeping the soil fertile and conducive for planting, anyone could plant and grow vegetables that are of the highest quality.